The 2019 winter was officially a winner! The most encouraging sight was seeing the drinking water reservoirs cascading over their spillways! The low elevation snow-melt topped off all of the uptown reservoirs, which is pretty incredible considering that Lake Hatcher was 9 feet down, and Steven's Reservoir was 14 feet down last fall!

We did set one snow record: the 2019 maximum snow depth at the Wolf Creek Pass Summit SNOTEL site reached 153 inches topping 2005 and 2008! The snowpack during those monster years must have settled more due to higher moisture content. The only place in the lower 48 that had more snow on the ground was the Sierra Nevada Range (>200 in). 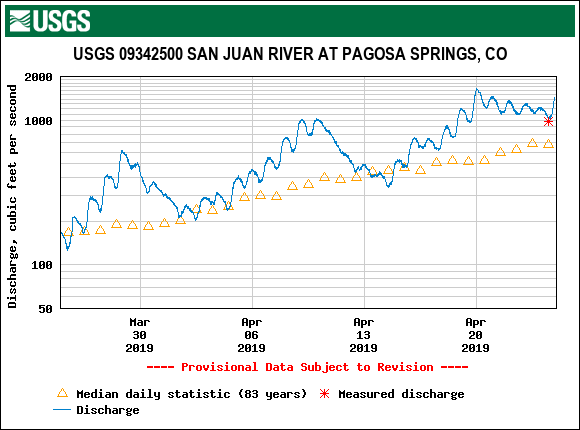 Every year I enjoy trying to predict the magnitude and timing of the peak spring runoff. My Snowflow Model is predicting 3440 cfs on May 29th. The historic median is 2465 cfs on May 26th. However, anything is possible during springtime in the Rockies!