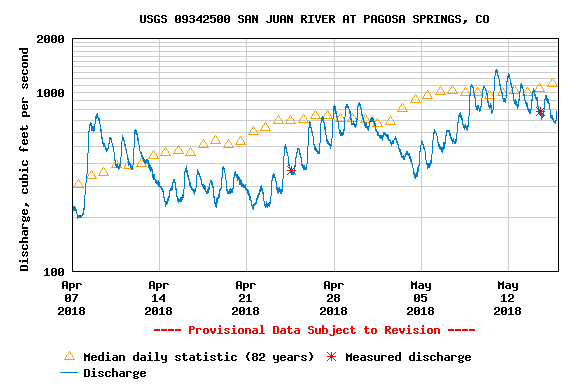 Even though the Upper San Juan Snotel Site ran out of snow on April 30th, the late spring snow storm on May 2nd slowed the melt, rejuvenated the snowpack, and extended the peak runoff event into May instead of April.

The strange thing about this year's runoff is the fact that the river peaked after the Upper San Juan Snotel Site ran out of snow. Historically, the river peaks when about 30% of the winter snowpack remains at the site. But, for the past 6 years in a row, the San Juan River has peaked after the Upper San Juan Snotel site has ran out of snow, which makes me wonder whether the loss of mature trees due to extensive beetle kill has changed how the site holds the snow. With most of the mature trees gone, there's less shade, less sublimation from the canopy, and less transpiration of soil moisture. Another possibility is the 2013 West Fork Fire has increased the snowpack and water yield in the West Fork drainage, providing extra water after the snow is gone from the Upper San Juan. Regardless of why, there was more streamflow than I anticipated considering the snowpack was the 2nd lowest in the 82-year record. But I'm not complaining!