Wondering how the 2018 snowpack stacks up against recent years with big summer wildfires? And when and how much streamflow will our meager snowpack generate in the San Juan River this spring?

The Upper San Juan SNOTEL site ran out of snow this week on 4/30/18. May 1st is a good date to compare snowpack to the historical record because snow measurements extend back to 1936. Based upon the site's 82-year history, the site has only been out of snow before May 1st one other time...2002. Normally, the Upper San Juan SNOTEL site holds the snowpack until June 2nd. Fortunately, a late season snowstorm is predicted to slam the South San Juans over the next couple of days! That's great news for our water supply and fire risk!

This week, the river eclipsed the rain-on-snow event that happened on April 8th, and may have unofficially peaked at midnight on April 30th at 881 cfs. If tomorrow's snowstorm pans out, the snow levels are low, and the temperatures rebound quickly, the San Juan River may reach higher levels early next week. If not, the San Juan River will have peaked during the month of April for the 4th time in the 82-year record (the peak spring runoff usually occurs in late May). 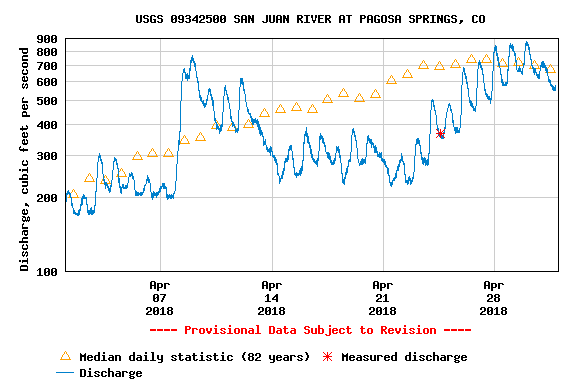 Last night, I saw my first June bug, and like the snowpack, a month ahead of normal.

The pine beetles are also out early (they are much smaller than June bugs...June bugs eat plant roots). This weekend, I stumbled upon a fallen green ponderosa pine in the Turkey Springs Area.

Normally, a healthy tree generates sap and "pitches" beetles out as they bore into their bark. Without the ability to generate pitch, the beetles converged upon this defenseless tree. When a beetle finds a weakened tree, they put out a pheromone that tells other beetles to converge. Each orange mound of sawdust indicates where a female beetle has bored into the bark to lay eggs.

In the next month, the larvae will emerge from the eggs and eat the green layer under the bark, and then later emerge as beetles, who will find other weakened trees. When beetles get a head start in April, it's possible for them to get two life cycles in before the fall, which can cause a population explosion (especially if trees are weakened from drought). Hopefully we don't get a pine beetle population explosion this year!