Wondering how the 2018 snowpack stacks up against the worst 4 years in recent history? And when and how much streamflow will our meager snowpack generate in the San Juan River this spring? If you're a kayaker, you might want to drag your boat out mid-week and you might catch some fleeting high water!

The 2018 winter started out similar to the dry winters of 1990, 1996, and 2000. Unfortunately, March was a bust, and so far April has not panned out. As a result, we've fallen behind those 3 bad years, but fortunately we're still doing better than the worst drought on record, 2002.

This past weekend, we caught the tail edge of a warm atmospheric river event, which brought about 0.5 inches of much needed rain the low elevations of the Southern San Juans. However, the Upper San Juan SNOTEL site lost rather than gained snowpack during this storm, which is common during a rain-on-snow event. Rain-on-snow events occur when spring rain falls on winter snowpack, accelerating the melt rate and leading to high flow conditions. The San Juan River spiked to nearly 700cfs after the rain and yesterday afternoon's snowmelt added to the event bringing the river to nearly 800cfs last night. 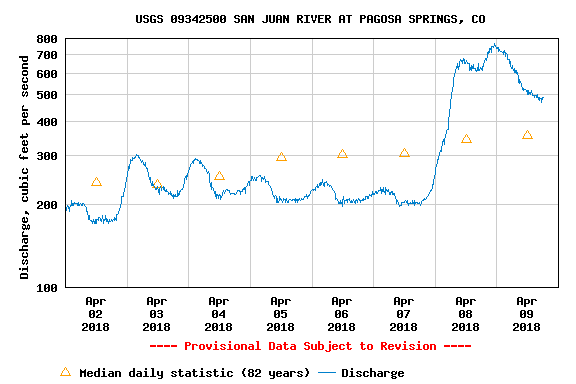 April 1st is an important date for Colorado water supply managers as they attempt to predict the magnitude and timing of the spring runoff in order to manage the water levels in our reservoirs. Unlike other 1st-of-the-month snowpack values, the April 1st snowpack measurements extend back to 1936 at the Upper San Juan Snow Course, which means we can compare 2018 to an much longer period of record (83 years of snow course data instead of just 39 years of SNOTEL data).

Looking at the streamflow records for each of these years, only 1977 and 2002 ended up having dismal spring runoffs. The 1977 snowpack generated a peak runoff of about 400 cfs and the 2002 snowpack, which melted by April 22, only generated a peak runoff of 296 cfs. The rest of the years plotted above managed to receive more snow throughout April and May and the runoff season wasn't a total loss.

So, when and how much flow should we expect in the San Juan River this spring? According to my snow-flow model, the river will peak at 1400 cfs on 5/16. Since there aren't many low snowpack observations in the period of record, I think the model is overpredicting (or assuming we'll get more precipitation in April and May). Second guessing the model, I think the river will peak around 1200cfs during the last few days of April. However, spring rain could save us like it did in 2015, when we received a record amount of rainfall in during the month of May. But just in case, get your kayak in the river, especially on Wednesday and Thursday before a dry, cold front arrives Thursday night and hopefully slows the melt rate.