The current 2019 Southern San Juan snowpack is not unprecedented, but it's getting harder to find years to compare it to! Winter appears to have lost it' grip and we're finally back to losing rather than gaining snowpack.

Clearing Snowstorm on May 23rd

Statewide, we're reporting ridiculously high snowpack numbers, but believe it or not, they are actually higher because it's no longer possible to describe the snowpack as the percent of the median.

To calculate the percent of median (the quantity displayed on the above graphic), you divide the current snow water equivalence (SWE) by the median SWE, then multiply by the resulting quantity by 100. But many of the SNOTEL sites are normally out of snow by this date, which means the denominator is zero and you all know what happens when you divide by zero. These stations have been removed from the map. 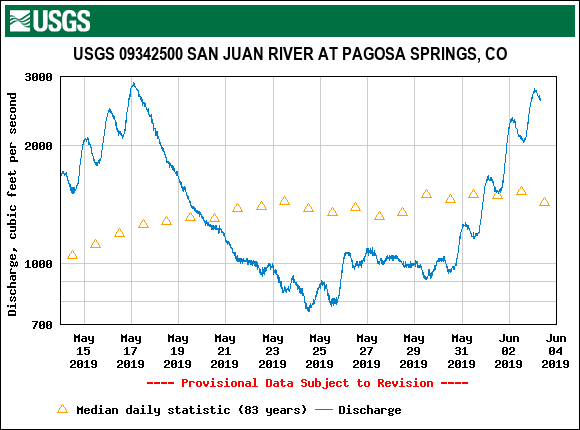 So when was the last time we had this much snow in June at the Upper San Juan SNOTEL site? The earliest June 1st SWE measurement that I could find was taken in 1957 and since then, I could only find 5 years with a similar snowpack as 2019. I plotted the SWE vs the peak spring runoff values and included the date when the peak occurred. Based on the graph, 4,000 cfs still seems possible, but of course, it all depends upon the upcoming temperature and precipitation.

The weather prediction for Wolf Creek Pass shows mild temperatures with highs in the 50's unlike the warm June of 1980 or cool June of 1995. Notice the low temperatures are not predicted the to dip below freezing, which will keep the snowmelt going all night. However, the afternoon cloud cover should slow the snowmelt.

We'll know soon if my updated spring runoff prediction of 4,000 cfs on June 8th is still on track! At this point, it seems too little high considering the mild high temperatures and cloud cover in the forecast. The Springs Resort might want to start sandbagging just in case!