Each year, I use a snow-flow model that my Global Science students developed in 2013. Students correlated historical snowpack numbers (peak snow-water equivalent) with peak spring runoff values dating back to 1979. Each year I have my students update the model with the current numbers and make a new prediction.

Normally I publish a prediction earlier, I've been too busy learning new digital platforms, making instructional youtube videos, and digitizing my curriculum for 3 subjects amid the coronavirus-related school closures. Fortunately, the 2019-2020 Global Science class was able to make a spring runoff prediction just before school was canceled.

Backtracking to March, the snowfall ended up slightly above average as 6.3 inches of water fell in the form of snow at the Upper San Juan SNOTEL site. The winter was a rollercoaster in terms of monthly snowfall with 3 months above average and 3 months below average. Given the hot and dry weather forecast for the remainder of the month, it appears April will be below average with only 0.5 inches of new precipitation so far.

In terms of season totals, the Upper San Juan SNOTEL site peaked twelve days early on April 1st with 26.6 inches of snow-water equivalent, which is 82 percent of normal or 5.7 inches less than the normal peak of 32.3 inches. Last year, the site peaked on April 14th with 41.7 inches of water. The Wolf Creek Summit SNOTEL site peaked a month early with 28 inches on April 2nd, which is 80 percent of the normal 35.2 inches. Basically, the San Juan River watershed has about 20% less snow-water than normal and it's melting earlier than normal, which partly why the Drought Monitor placed southwestern Colorado in the severe drought category.

Although our area missed out on the late-season snow that hit the northern Colorado mountains, we did benefit from colder temperatures, which put the brakes on our early snowmelt. Before the mid-April cold front, the San Juan River was flowing above average and reached 664 cfs on April 11th. In Pagosa Springs, temperatures are predicted to reach the low 80s (nearly 20 degrees above normal) by next Friday so the river is going to be raging by next weekend. 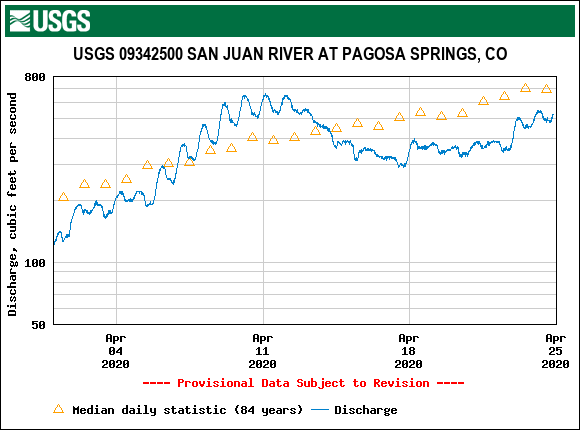 The Global Science Snow-Flow model predicts that the San Juan River will peak around 2300 cfs on May 22, but the abnormally warm temperature predicted for the next week makes predicting the peak spring runoff difficult. Normally the peak spring runoff is 2480 cfs on May 26. The above-average temperatures next week will steal from the peak flow, which should still happen in late May although I'd hesitate to bet money on my prediction!