It's amazing how much a drought can make you appreciate the rain! Ironically, it's the lack of rain in May and June that sets the stage for rain in July! So what controls the moisture tap, why doesn't the tap turn on earlier, and what can kink the hose mid-summer?

First, here's an early season monsoon summary. Over the last 2 weeks, the South San Juans have been blessed by consistent monsoon-fed thunderstorms. Dew point values have hovered well above average thanks to a consistent plume of moisture streaming up from the south.

Storms have been localized, but intense. The San Juan River finally showed some signs of life, steadily increasing from 31 cfs on July 11th to almost 188 cfs on July 18th, which is close to the median for this time of year. 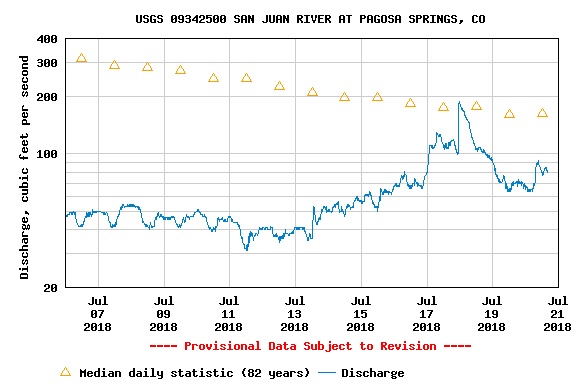 So how does suffering through the hot, dry, wildfire prone month of June lead to the onset of the monsoon season in July? Monsoon moisture plumes are basically large scale sea breezes. During the winter and spring, the water temperature of the Gulf of California is warmer than the adjacent Sonoran Desert. As the desert bakes in the early summer, the land temperature exceeds the water temperature. As hot air over the desert rises, cool, moist air is drawn northward from the ocean. As I discussed in the previous post, a consistently high dew point indicates that the moisture is flowing into our area.

Another factor that influences the monsoon season is the location of high pressure systems. If a high pressure system is located in the eastern plains, the jet stream is diverted north, and air flowing clockwise around the high draws moisture toward the South San Juans. When this happens, the wind shifts from the west to the south or the east (the wind shift sometimes helps fire fighters gain control of a wildfire). The ideal monsoon scenario for the South San Juan Mountains is shown below, and has yet to occur so far this summer.

Intermissions in the flow of monsoon moisture to our area typically occur when the high pressure system is located directly overhead or to the west of us. High pressure air overhead suppresses thunderstorms as it sinks, and drags the moisture further west of us.

Next time you see a weather report, hopefully the location of the big H and L's will have more meaning to you. Hopefully the L will continue to camp out above the Gulf of California and the H will park over Oklahoma. If that happens, expect to see more widespread thunderstorm coverage, and a much needed increase in soil moisture and streamflow.