Is this Ireland or the San Juan Mountains? It sure is green, but just looking at the 7-day forecast makes me shiver! In stark contrast to the last 2 decades, our May snowpack is lingering and it's even expected to increase substantially this week. Which is why I need to update my spring runoff prediction (I predicted 3440 cfs on 5/29) and find some firewood!

Last year, the stock ponds didn't fill and were drying up. This year they are still overflowing!

Currently, the Upper San Juan SNOTEL site still has 30.6 inches of water stored in the 65-inch snowpack, which is 1.7 times above normal. Typically this time of year, about 1 inch of water melts from the snowpack per day, which means the snowpack is gone by June 1st (at 10,200 ft). At our current rate, we're likely to have snow above treeline until at least August. What's more amazing is that we're only 3 inches from our annual precipitation total of 53 inches (red and orange lines on the graph below).

The short range forecast is covered with snowflakes and the 8-14 day forecast predicts a 60% chance of below average temperatures. 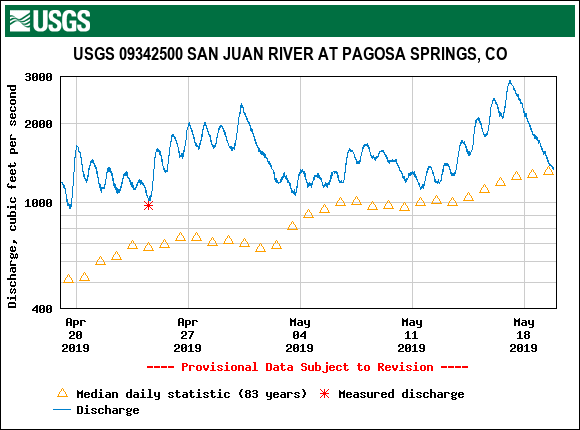 As you know, the peak spring runoff date depends on the temperature and precipitation over the next few weeks. Based on the predicted cold, wet weather, I'm going to guess that this year will be similar to 1997, but a little colder. So my new spring runoff prediction is 4000 cfs on June 8th. I'll probably be wrong again, but if you're still reading, you've witnessed the riveting prediction process!