The town of Pagosa Springs can breathe a sigh of relief: it appears that the much-anticipated peak spring runoff event has occurred without causing too much damage. 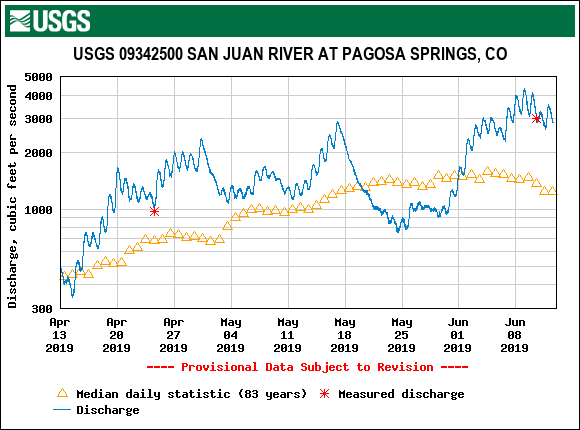 The 2019 peak runoff is the 5th highest spring flow event in the last 40 years and the highest since 2005. Fortunately, the river didn't reach 5,000 cfs like it did in 1979 and 1995. More significant flood damage happens at that threshold and a lower flow means a longer rafting season (sorry anglers).

Over the past 40 years, the 2019 snowpack is 2nd only to 1995 in terms of lasting the longest. The Upper San Juan SNOTEL site is usually out of snow by June 1st and it appears like the snow will last another week.

Instead of clinging to rafts through rapids, people were floating the lazy river on tubes. This week, I had to re-route my run around the flooded sections of the river trail, and there is barely enough clearance for rafts to pass under the Malt Shop bridge! It's been quite the come-back!