Wondering how the 2018 snowpack stacks up against recent years with big summer wildfires? And when and how much streamflow will our meager snowpack generate in the San Juan River this spring?

Despite last week's snowstorm, which added 0.2 inches of water to the Upper San Juan SNOTEL site, the snowpack has continued to plummet, which probably solidified this year's rank as the 2nd lowest since 1979. There is only 5.1 inches of water left in the snowpack, which is 17% of normal.

Based on slope of the red line (above), the Upper San Juan SNOTEL site may be out of snow by this weekend, unless a potential weekend storm pans out. Normally, the Upper San Juan SNOTEL site holds the snowpack until June 2nd. Since May and June are typically our driest months, a May 1st melt date means we would enter our dry season one month early.

The 3 biggest wildfires in our area were all preceded by below average snowpack and early snowmelt dates. We're still doing better than 2002, which is the year of the Missionary Ridge Fire, but we're behind 2012 (Little Sand Fire), and 2013 (West Fork Complex Fire).

Cold night-time temperatures followed the recent storm, which should have slowed snowpack loss, but the snowpack has continued to drop. That may mean much of the snowpack is sublimating due to high winds, and we've passed our peak runoff date. I still think there's enough snow remaining to eclipse the rain-generated peak on April 9th, but we'll know for sure this weekend. 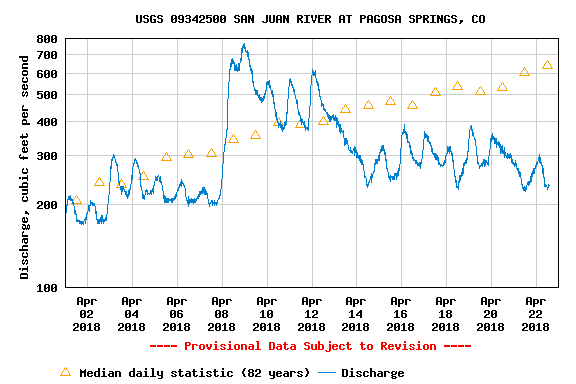 The bulk of the recent storms have tracked north of our area and as a result, the northern half of the state has average snowpack for this time of year.

According to a recent update by the USDA, the Four Corners is currently in "exceptional drought" conditions.